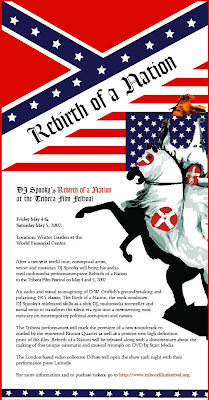 The Tribeca Film Festival has a great program tonight and this weekend. From their site:
Rebirth of a Nation galvanizes the audience with a challenging interactive experience. Paul D. Miller (a.k.a. DJ Spooky That Subliminal Kid) re-works, re-makes, and re-interprets one of America's most controversial films, Birth of a Nation, and calls it Rebirth of a Nation.

Mixed live and projected on a triptych, this is the first time Miller will be using new visual material that he has produced with Starz and a re-worked score as performed by the Kronos Quartet, to create uniquely visceral production. The point, in fact, is to create a new narrative in response to fallacies that were propagated by the original film. In Miller's own words: "Birth of a Nation focuses on how America needed to create a fiction of African-American culture in tune with the fabrication of 'whiteness' that under-girded American thought throughout most of the last several centuries: it floats out in the world of cinema as an enduring, albeit totally racist, epic tale of an America that, in essence, never existed. The Ku Klux Klan still uses this film as a recruiting device and it's considered to be an American 'cinema classic' despite the racist content."

The result is a new experience in the evolution of art, cinema and activism.
Also, don’t miss the opening act, "Latitude", a performance piece by D-Fuse inspired by the notion of drifting through the urban land and soundscapes of China. In their New York premier, this London-based video art collective challenges the way you see and hear by following the emotive qualities of spaces that surround us. Fragments of conversations, crowds, journeys, lights, deserted space, and architectural forms are mixed in a unique live performance tracing a multitude of paths, identities, and influences, representing the everyday life of cosmopolitan China.


» Get Tickets for Rebirth of a Nation

Posted by BNewmanSBoard at 4:21 PM


POST YOUR DEMO/REMIX at http://www.youmixit.com/ AND LET THE WORLD TUNE IN TO & VOTE FOR THE FAVORITE WEEKLY TOP 15!