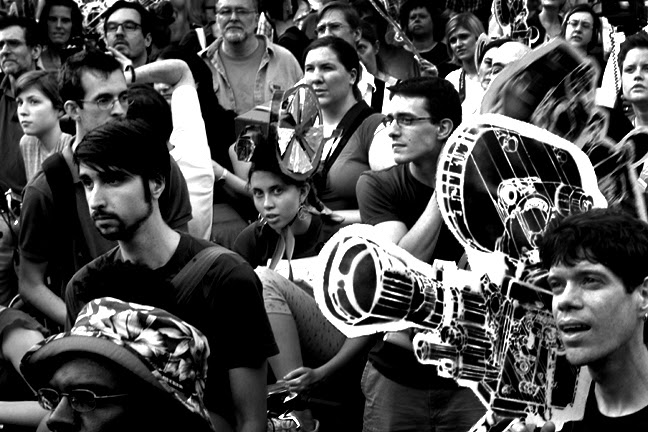 Plenty has been written (as well as broadcasted) about the new group Picture NY, which formed somewhat spontaneously in response to the misguided NY Mayor's Office restrictions (links to PDF) on free speech by proposing new rules covering filming and photographing in the city. You can read all about it elsewhere.

What I find most interesting, and inspiring, about all of this has been the way that NY filmmakers came together, without any established group taking the lead, to protest this nonsense. I've written a lot about the death of AIVF and what it means for advocacy, and this is a perfect example of something AIVF would have taken the lead on in the past. It's great to see that when it really matters, some good old grass-roots organizing can make a difference. In about three days, Picture NY has been able to raise over 7,000 signatures on their petition (this is as of Sunday at 2pm). That's astounding. More than 400 people showed up in Union Square for their protest (and this during the Simpsons movie premiere!), and they may actually make real changes to the rules.

I attended the beginning of the rally on Friday (...there was that Simpsons movie), and I was really enthused by the energy. I saw many familiar faces, and was quite proud of Jem Cohen, whose email really helped kick this campaign into action. While I am aware that some organizations are working behind the scenes on this issue (IFP being the leader in this regard, kudos to them), their efforts pale in comparison to this grass roots advocacy, and this shows that filmmakers do care about policy concerns after all, especially when it affects such fundamental issues. I look forward to seeing whether this group leads to something more.
Posted by BNewmanSBoard at 2:09 PM No comments:

Another Look at the Long Tail and Video

Bear Stearns recently released their second report on the long tail and its effects on video distribution. Entertainment Industry: A longer Look at the Long Tail (links to PDF) is great - a very succinct analysis of trends in the field, and while Bear Stearns is focused on big players that want to make a lot of money, it applies to the indie world as well.
Some important findings, with my comments:
Anyway, the full report is linked above and is worth a read to those who think about these issues. I mentioned this at Silverdocs as well, but it bears repeating - Spencer Wang's reports at Bear Stearns are always right on target.

CNN reports that the most read blogger in the world is Chinese actress Xu Jinglei, who film fans know from Letter from An Unknown Woman, a festival hit last year (San Sebastian Fest) She has had over 100 millionpage views in 600 days according to Tehnorati, and according to CNN, she did it without sexual language or gossip about her life as a star.
I realize this isn't the average post for this blog, but I'm fascinated at how popular her blog has been, and think it show the possibilities for other blogs. Yes, she is a huge star (much better known outside of the US, especially in China), but one would have still expected someone like Tom Cruise to get this honor first, or perhaps Jenna Jameson. It also shows that celebrity will still rule the internet, and that the US doesn't dominate culture (yet) online.
Posted by BNewmanSBoard at 10:26 AM No comments:

This is pretty cool, in a weird way. Several people have posted this new study from the National Legal and Policy Center about Google and online piracy. It's a typical hack piece on piracy with absolutely no nuance, but it has an interesting nugget buried in it -
Baghdad ER, the excellent indie HBO doc by Jon Alpert (of DCTV) is on the list of most pirated videos recently on Google, and it even makes the top ten. This is great news!
"what??" you might ask. Yes, I think it's a good thing. I'm not encouraging piracy, but most studies show a direct correlation between the popularity of illegal downloads and popular sales. For example, Britney Spears is illegally downloaded quite often, and she sells a lot of records (bad example, I know). So, in theory, this piracy statistic should mean that sales could be strong for this video. In addition, it should mean more people have seen this important film, so I think its a good thing overall.
Grid below from TechCrunch:

Posted by BNewmanSBoard at 5:25 PM No comments:

Following up on my earlier post about the Ipod and its negative implications for creativity, here's a great new site on the IPhone. I'm pretty tech geek, but hate the iphone for two reasons - price and its being locked to AT&T, so I opted out on the long lines for those reasons. Looks like Free Press is even more serious than me in their boycott! From the site:

Apple touts the iPhone as the “Internet in your pocket” — but it’s not. You can’t use it without signing on with AT&T, and once you do they cripple services, limit what you can do and restrict where you can go on the wireless Web.

We need Wireless Freedom — and our elected officials are the only ones who can give it to us: the freedom to use all Internet devices on any wireless network in a market that offers true high-speed Internet and real consumer choice.

Take action today. Demand that the FCC and Congress free the iPhone and put the Internet in the hands of everyone.

Posted by BNewmanSBoard at 3:35 PM No comments:

Agnes Varnum has launched a new podcast on Resources, the blog of Renew Media (where I work). Her first podcast is an interview with Philip Mallory Jones, one of our media arts fellows, and a great filmmaker, now digital artist, who has made a pretty successful move into Second Life. As Agnes describes:

His new work, IN THE SWEET BYE & BYE, is a three-pronged collaborative project with his mother Dorothy Mallory Jones, which includes a book, gallery installation and an installation in Second Life. From his text, “It is an evocation of African-American personal/familial/communal narratives and allegories, in words and distinctive interpretive visual compositions. It is a hymn of nuanced harmonies and discords; a blending of voices sweet and rough. It is a trans-generational memoir, illuminating paths we walk, stories we’ve been told, and the dream-places we haunt. It is a continuation of my four decades of art-making and research, and my creative collaborations with poet/novelist Dorothy Mallory Jones.”

Definitely something to check out. I like his mix of orality and new media literacy (electracy, per Ulmer). I haven't visited this yet, but plan to asap.

Agnes did an amazing job with this podcast- it's her first podcast for us (and I think her first podcast at all), and she did it quite professionally. Nice music intros and interludes, great interview questions, good editing. It's the first of several that she'll be launching with us, and I can't wait for the next one. We should have a subscription button up soon, and perhaps I'll learn how to embed the podcast directly into this blog soon! For now, it's here.
Posted by BNewmanSBoard at 9:14 PM No comments: