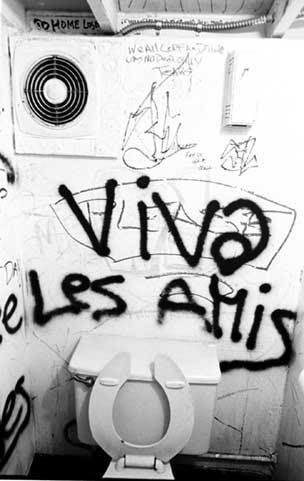 My good friend Nancy Higgins recently screened her film Viva Les Amis as part of a showcase put together by my other friends at SXSW. The film is a great look at something that seems to happen everywhere - the replacing of a great cafe by a Starbucks. Well, it's not that simple. Les Amis was a cafe in Austin, Texas that was the quinessential college town cafe - run by quirky characters, worked at by drunks serving cheap food to other drunks and providing a place for slackers, punks and probably some students to hang out.

And it was slackers - in fact, Linklater's Slacker featured the cafe prominently. As the town got less weird, contrary to the current shirts proclaiming to "Keep Austin Weird," the cafe eventually closed down. High rents being a major part of the problem. Today, a Starbucks sits on the site.

No, Starbucks didn't force them out, but like so many other places, they benefitted from the changing demographics of the town. What makes this film great is that Nancy doesn't just play to the stereotype of the evils of gentrification, changing populations and green logos. She explores what the cafe meant to residents, but she also takes time to get to know the new employees of Starbucks. They are much more sober, but also have better health care, than the workers from Les Amis. She also fashions a film that becomes interesting to others than Austinites or Slacker fans. The film is about the dying of a culture, the changes that inevitably face any town that starts to grow and serves as a testament to the importance of the smaller things in life. It's great regional cinema - little films that say big things by focusing on something seemingly insignificant.

The film was recently programmed in Austin at the Alamo, and in Orlando at the Global Peace Film Festival. You can purchase the DVD, or just watch the clips online, but either way - you should check out this film.

Posted by BNewmanSBoard at 8:00 PM